2015 might be remembered as the season of walk-offs at Frontier Field. The Wings managed 9 of them this past season so photographing dramatic on-field celebrations became my specialty. I feel with each passing year, my gig as a Red Wings team photographer gets better for me personally and professionally. I continue to be honored by the recognition my work gets from Minor League Baseball (MiLB) and from the support I get from my friends on social media – this is where much of my motivation comes from. In 2015, one of my photos of Byron Buxton was nominated for MiLB’s Photo of the Year. Fan voting placed it second but I was extremely pleased just to have been nominated. A heartfelt THANK YOU to my family and friends who helped stuff the ballot box!

I hope you enjoy my 2015 Favorite Pics of the Year.

Heading to Florida to cover spring training is something I look forward to all winter. I think about it every day after the holidays are over. I was so impressed upon arriving at Hammond Stadium in Fort Myers, by what the Twins had done to upgrade their spring training facilities for 2015.

This photo was the last frame I took at spring training 2015.

Waking up on Opening Day morning feels similar to getting up on Christmas morning when I was a kid for me. In my view, our long winter ends on Opening Day. I always like to shoot morning batting practice on this special day. As I was taking this picture of new manager Mike Quade interacting with his freezing players on this 36 degree April morning, one of the returning players (I think it was Eric Farris) yelled out to the new guys, “Welcome to Rochester boys!”

This photograph of Josmil Pinto jumping into a crowd of his excited teammates waiting for him at home plate is probably my favorite picture of 2015 and it came on the first home game of the season. Pinto’s dramatic Opening Day walk-off homerun was the first of 9 walk-off wins for the team last season. 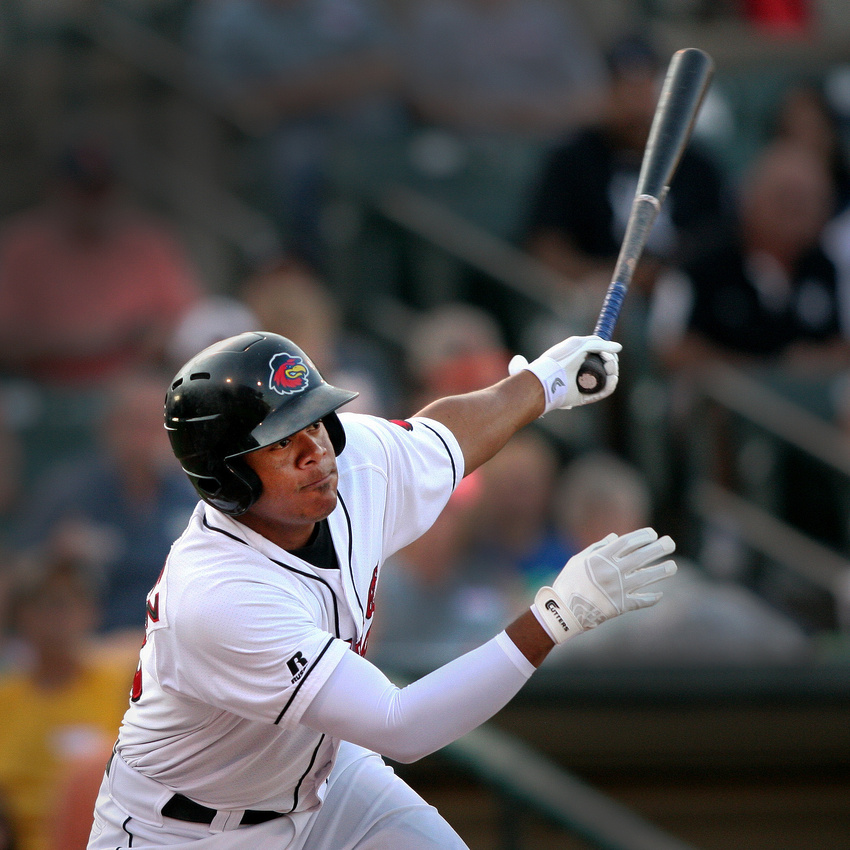 This was my first season with an Instagram account - @joe_territo. It allowed me to work with my images in a square format on a regular basis which was a fun and different approach for me.  This picture of Reynaldo Rodriguez watching his hit sail into right field benefited greatly from a square composition. 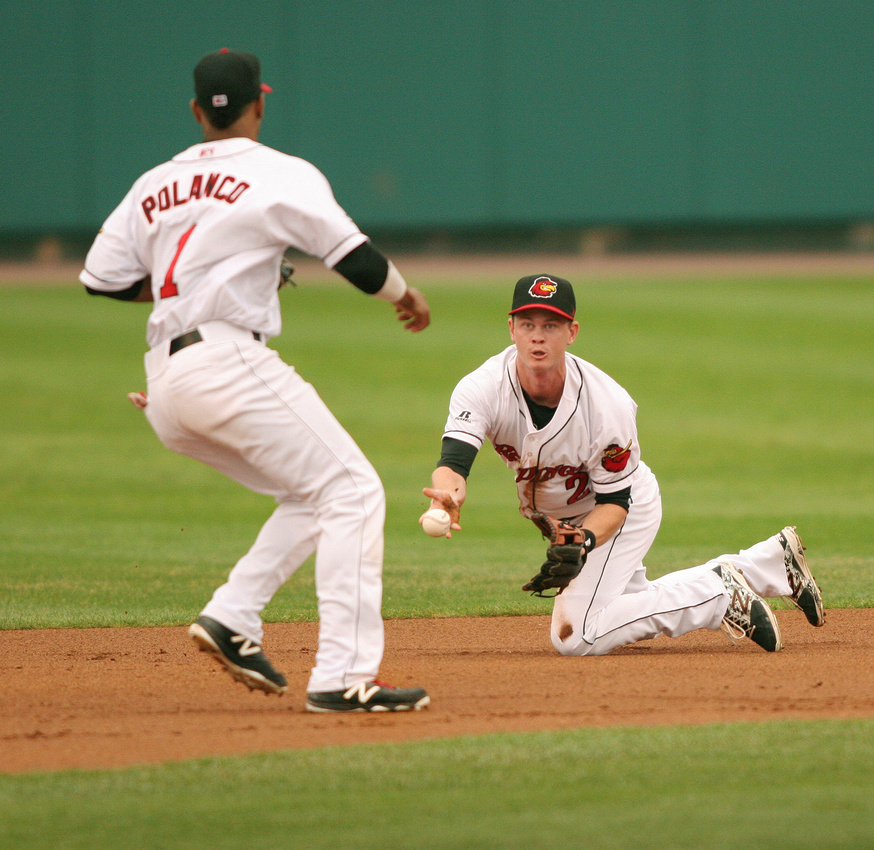 Once again during this past season, James Beresford excited fans with his acrobatic play at second base. The 2015 International League All-Star flips the ball to his shortstop, Jorge Polonco, to start a double play.

I’m intrigued by historic baseball photographs and like incorporating sepia tone into my work occasionally. I feel a sepia photograph has a timeless quality. Eric Farris rounds third and heads for home to score the first run of the game against the Durham Bulls on May 18th. Red Wings win it 3-0.

Before this group photo was taken, Brett “Hitman” Hart looked on in awe as members of the Red Wings pitching staff greeted him in the clubhouse, one by one, dressed as WWE wrestlers. The players planned this tribute for weeks prior to Hitman’s June 8th visit and imitated their characters perfectly. 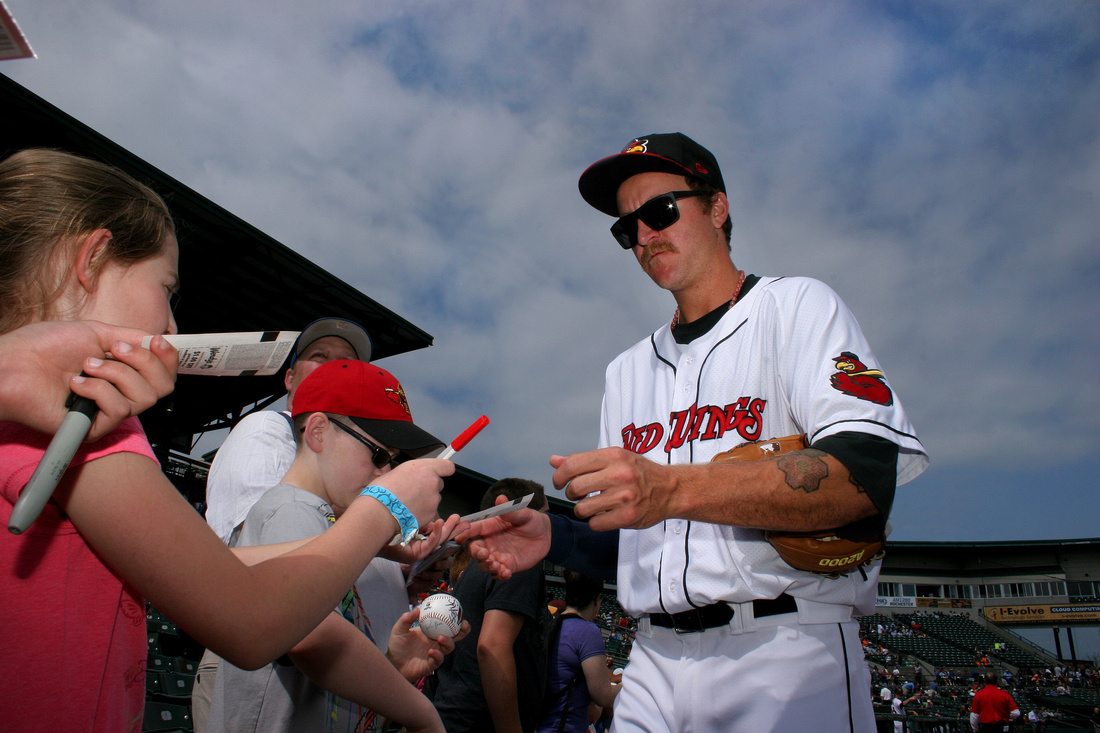 Pitcher Mark Hamburger never seemed to tire from signing autographs. On July 21st last season, he was quoted in the Democrat & Chronicle as saying “I’ve had days when the fans have been my only reason I’m still going as strong as I am”. The 2015 Red Wings were loaded with fan friendly players. 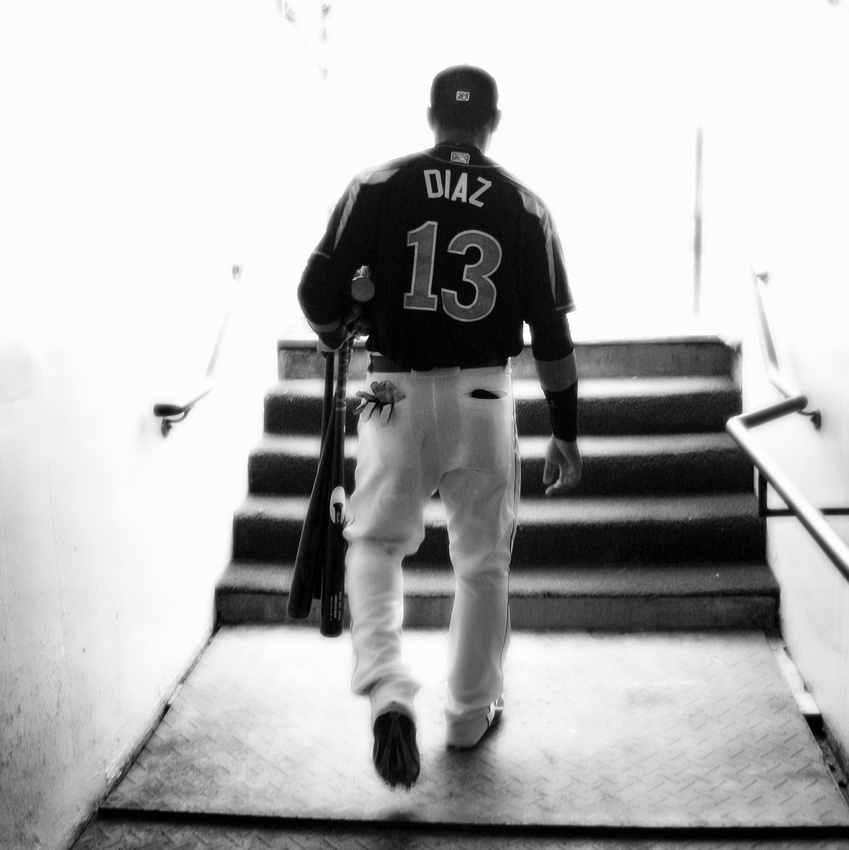 Argenis Diaz makes his way to the field to take on the Lehigh Valley IronPigs. This is one of those pictures that was in my mind for a while, part of my baseball photo bucket list if you will. It was probably inspired by a similar image that I had seen in the past and I had locked away in my brain. I had to plan for the right time to shoot this. It needed to be shot during a day game and I needed the team to be wearing their black jerseys. I wanted to blow out the background to give it a surreal feeling and if they had their home whites on, there would have been a loss of separation. This picture was selected by Minor League Baseball as a Photo of the Week for the week of July 8th.

I’m a portrait photographer at heart so when I spotted former Red Wing, Darin Mastroianni, quietly sitting in the Syracuse dugout waiting for the game to start, I couldn’t resist taking this in-game portrait of him. The Twins have resigned Mastroianni for 2016 so there’s a chance we could see him in a Red Wings uniform again soon.

Shooting pre-game photos is not as exciting as capturing game action, but they’re important and often yield some nice pictures.

Twins right-hander Ervin Santana, pitches a rehab start on Star Wars Day, as he worked his way back to the Majors from a suspension.

I just like the simplicity. Not much more to say.

This past season I decided to add a 2X extender to my camera gear arsenal. It’s an attachment that essentially doubles the focal length of a lens. I used it for this photo of pitcher Alex Meyer in combination with my 400mm. I really like the compression that can be achieved with it.

Occasionally I’m called upon for special photo shoots involving players off the field. They require special planning and are usually lots of fun. This project, featuring Nate Hanson, Wings Director of Communications, Nate Rowan and Mark Hamburger, was to promote an August 1st hockey themed game against the Syracuse Chiefs, commemorating the 35th anniversary of team USA’s Miracle on Ice. The Red Wings wore the white hockey jerseys, the Chiefs wore blue and the umpires donned referee stripes.

Doug Bernier gets caught in a run-down during a game against Pawtucket on June 29th.  I always seem to get a lot of “keepers” when I’m focused on Doug because of the passion he displays while playing the game.

August 16th - my game plan on that hot summer afternoon was to focus on Byron Buxton exclusively. I wanted to photograph him playing center field mostly, so I shot behind home plate, high in the press box with a 2X extender on my 400mm lens. With RailRiders’ Kyle Roller at the plate in the top of the 2nd, he launches a ball deep to center field. Buxton gets on his horse and heads for the warning track. Without taking his eye off the ball he leaps up to catch it and in the process, hits the wall at full speed like it wasn’t even there. I knew I had captured this picture but as I was editing, I noticed that his sunglasses had popped off and were suspended in mid air along with his hat in this particular frame. This element gives the picture a little extra “wow” factor I think. Although it was nominated by MiLB for 2015 Photo of the Year, it wasn’t my favorite Buxton photo. 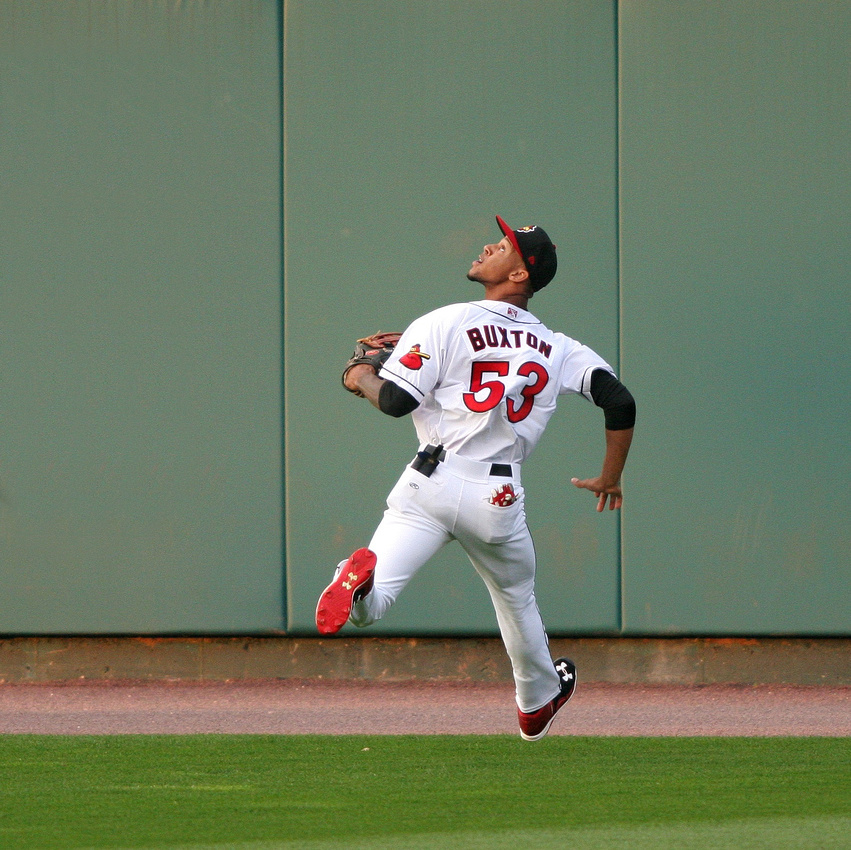 After a long wait, Rochester baseball fans finally got to see Byron Buxton patrolling center field in a Red Wings uniform at Frontier Field. Major League Baseball’s top prospect didn’t disappoint, hitting .400, during his 13 game stint. I captured many photos of him during his short stay and this one is my favorite. Seeing his name on the back of a Red Wings uniform at last was a thrill. 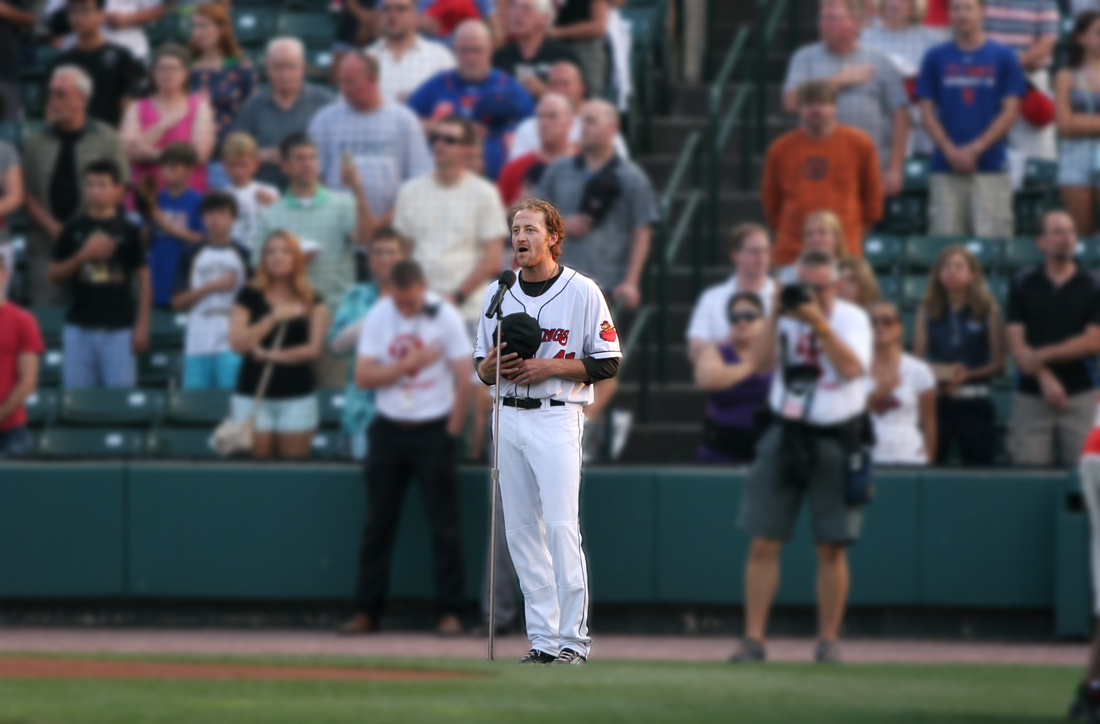 In my opinion, Mark Hamburger singing the National Anthem before the final home game was one of the highlights of the 2015 season. He sang it with such reverence and pride and on key! Mark told me, that it was pretty nerve wracking but it was cool to be able to do it for the fans and staff.